Since 1995, the Microsft Windows NTFS file system has supported streams. In fact, all NTFS "files" are actually streams. What we normally think of as a file in NTFS is more precisely called a default data stream. A default data stream is unnamed. What's an unnamed data stream? Consider the NTFS fully qualified filename format:

From left to right, we have:

The fact that there's nothing between the two colons (::) indicates that this is an unnamed data stream. For a default data stream, we do not need to use the fully qualified filename, although we can. For example, from the Windows command prompt, the following two commands open precisely the same default data stream:

To simplify things, we will use the term "file" in place of the more accurate "default data stream".

You can create a named stream in a file using normal NTFS naming conventions. For example, from the command prompt, run the following:

Select Yes when asked if you want to create a new file. Next, type the following content:

Save and exit Notepad.

These two stream sizes make sense in that stream foo.docx has no content while stream foo.docx:bar.txt has 80 bytes worth of content. To help elucidate this, add some content to the default data stream, as follows:

Save and exit Notepad.

Because of this, we can tell that the two streams consume 200 bytes on the volume. That said, running the unadorned dir command does provide somewhat misleading information - it implies that foo.docx only contains 120 bytes of data, which is inaccurate in the sense that when you delete foo.docx, you're actually releasing 200 bytes back to volume as available free space:

The moral of the story, perhaps, is to always use the /r switch. Which begs the question, how do you find all files that contain "hidden" streams? That topic is discussed next.

If we let the term "file" mean "default data stream" and "stream" mean "named data stream", then we can use PowerShell to find all files containing streams as follows.

Next, run the following commands:

For the current volume, this returns a list of all files containing one or more streams. This PowerShell pipeline is explained as follows:

From a PowerShell command prompt, you can remove the stream bar.txt from file foo.docx as follows:

If the stream name has spaces, you must use quotes, as in:

The original intent of NTFS streams was to enable Apple Macintosh file interoperability but NTFS streams can be quite handy. For example, you may want to "embed" detailed information within family photograph files: 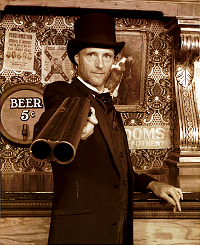 If the above image file were named "Bob's Grandfather.png", then you could add a stream (using PowerShell) containing detailed image information, as follows:

To view the image metadata you just set, run:

Note that the -Stream argument requires that you know the exact name of the stream (wildcards are not permitted). Recall that you can always obtain stream names using Get-Item (which accepts wildcards):

For the sought after stream name, look at the Stream property in the resulting output:

Other uses for NTFS streams can include:

Lastly, you may have noted that your volume contains a number of streams named Zone.Identifier. These streams are generally used by Windows for the storage of URL security zones, which determine whether a file should be trusted or not. An example showing how to view the contents of a Zone.Identifier stream follows:

And via the Windows command prompt: