How to use the Windows Subsystem for Linux (WSL)

In this tutorial, we'll start with some straightforward examples and culminate with using Linux, PowerShell, and DOS (cmd.exe) commands together.

To start, open your installed Linux distribution as follows:

1. Select the Start menu, then Ubuntu or whichever Linux distribution you installed. For example:

2. You should now be at the Linux command prompt (for your distribution): 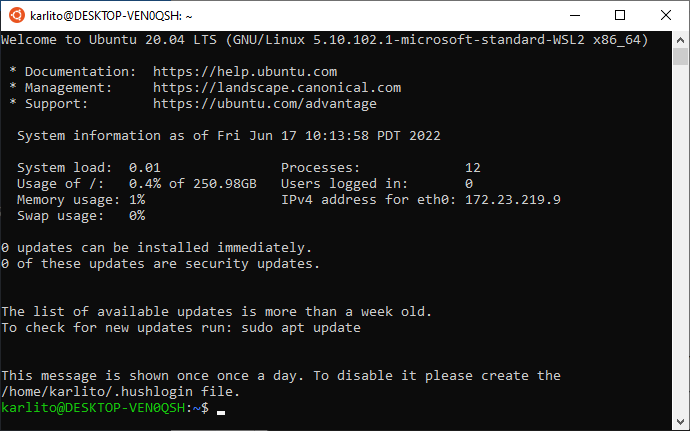 One thing to immediately notice is the number of running processes, 12 in this case. This highlights the fact that, as far as Linux is concerned, it's running on its own "machine". Windows, in this case, is actually running 236 process (including WSL): 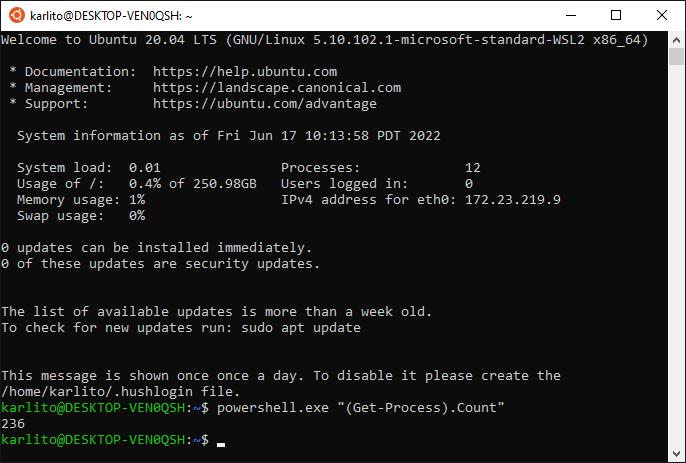 On line four of the above, we see that there's 11911.9 MiB (or legacy MB) of "physical" memory. To determine the actual physical memory of the system, you can run the following Windows commands from within WSL:

This shows that there's actually 15289 MB of physical memory:

In other words, some percentage of Windows' physical memory has been allocated to the Linux virtual machine.

Next, we'll examine the WSL Linux and Windows files systems and how they're exposed to each other.

From the WSL, run the following commands: 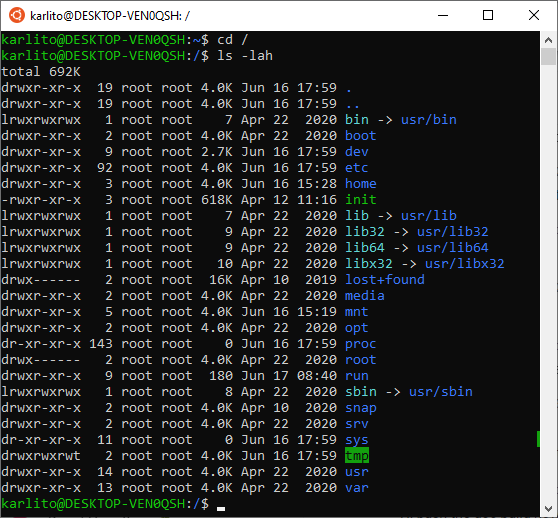 This is a typical Linux root directory listing. However, if we look within the mnt directory, we can see how the Windows file system is exposed through WSL (note commands): 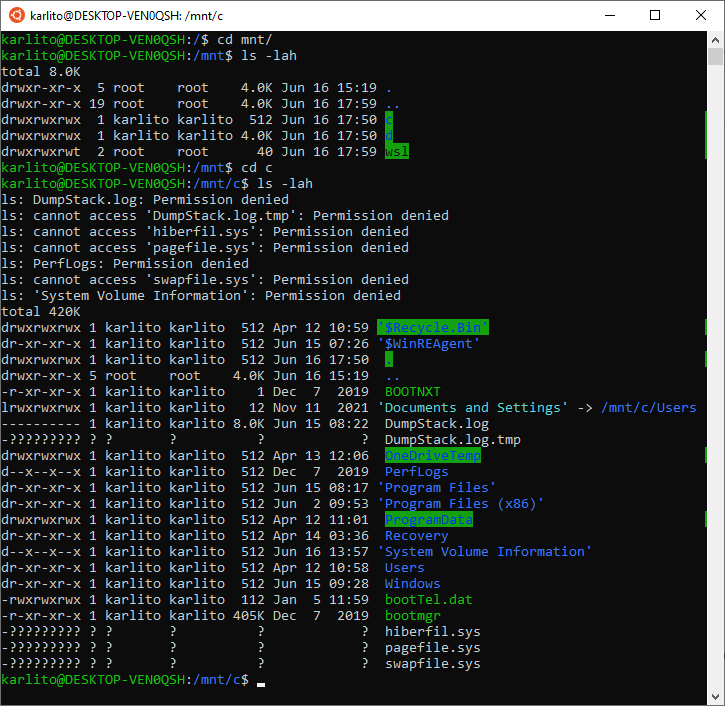 In the above, we see standard Windows folders such as Program Files, Users, Windows, etc.

Now, on the Windows side of things, we can access the WSL file system as follows:

1. Open Windows Explorer and in the address bar, type the network drive \\wsl$, as shown: 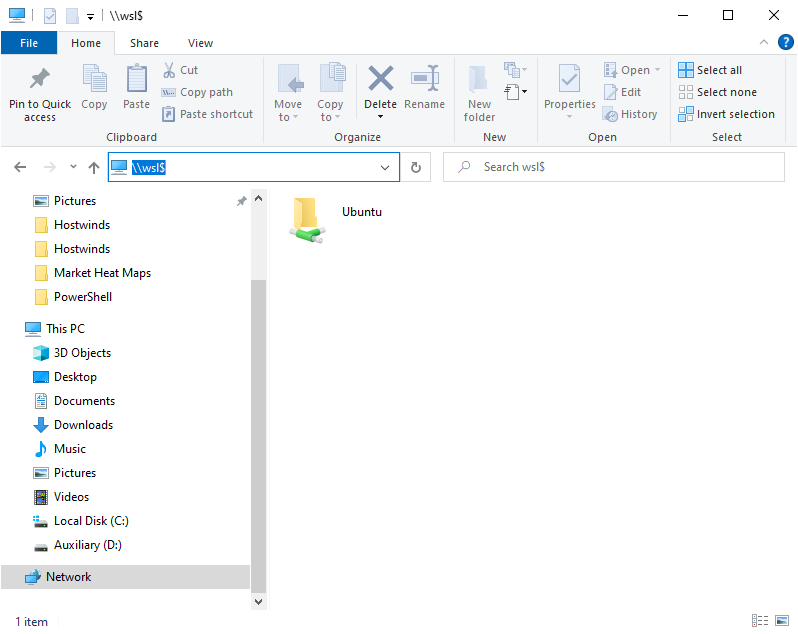 Note that the above image implies that you can have multiple Linux distributions installed at the same time, which is indeed the case.

2. Double-click the Linux distribution you installed (Ubuntu in this example). This provides access to the WSL file system: 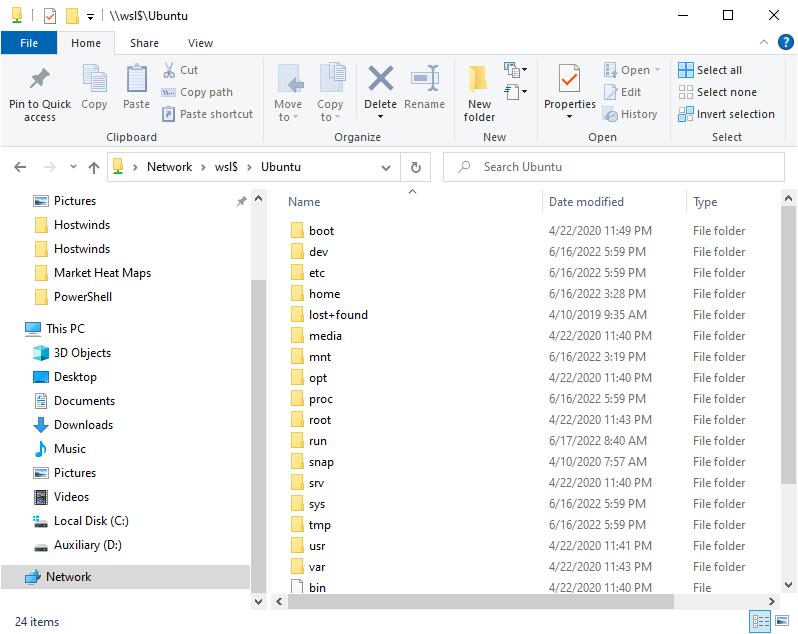 Next, lets examine a Linux command that Windows really should have - the du command. In Windows, it can be challenging to sort both files and directories by size. For Linux, this task is relatively straightforward:

Now wouldn't it be nice if Windows could do this? Well, thanks to WSL, it now can. From an elevated Windows command prompt (cmd.exe), run the following:

This results in output similar to:

Note the wsl preceding each Linux command. This is required to let Windows know that we're running a Linux command (from your installed distribution) and not a malformed Windows command.

Next, let's dig in a little deeper with respect to combining Linux, PowerShell, and DOS (cmd.exe) commands.

Here's an example of mixing commands at the WSL Linux command prompt. This combines Linux, PowerShell and DOS: 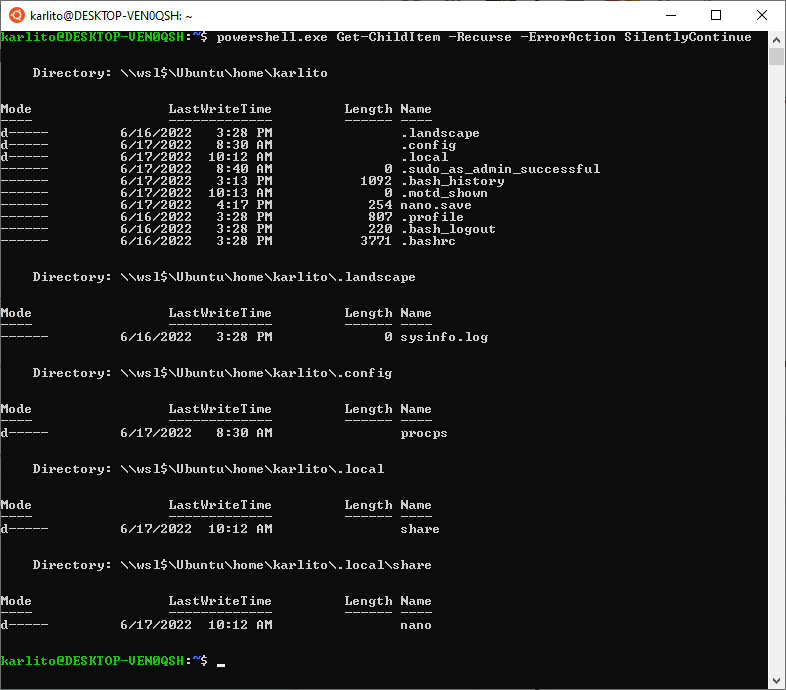 We then use the findstr DOS command to select the output containing "karlito":

Next, we'll run a similar command from the PowerShell command prompt, as shown:

Again, we'll look at this step-by-step, starting with representative output of Get-ChildItem: 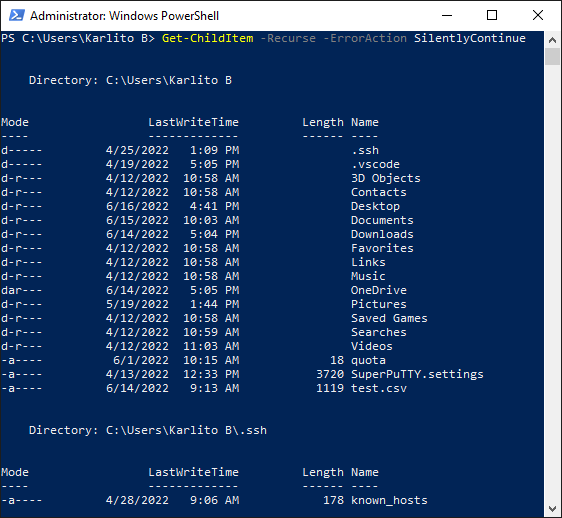 We next find the files/directories containing "karlito:

Note the six columns above (the PM/AM data is considered a column). Because of this, we need to change the awk command as follows:

Observe the \ character before the $6 in the awk command. Because the $ character has special meaning in PowerShell, so we must escape using \, as shown.

The last example runs the same command but from the Windows command prompt (cmd.exe):

Note the use of powershell.exe to run the PowerShell command and wsl to run the Linux command.

To conclude, by using WSL to attach a Linux distribution to Windows, you extend the power and capabilities of Windows as well as having a handy Linux shell at your fingertips. And, hopefully the information presented in this tutorial will improve your command savvy and efficiency.